Stevenson Group is experiencing surging demand for building sites at its $800 million “Drury South Crossing”, the  largest such business park  development in Auckland.

Drury South Crossing is the largest land holder in the area, and announcement of the project was a catalyst for major growth plans in the wider Drury region. The development will  deliver thousands of new jobs and houses, a new roading pattern for the area, greatly enhanced local amenities and the restoration of  significant streams and wetlands.

Civil works are well advanced and building construction will begin next year. More than 200 people attended an on site open day for the community last month.

The company has worked closely with Auckland Council, including Auckland Transport and Watercare Services, to ensure completion of major public works is closely coordinated with various projects being undertaken by private enterprise.

“We have been a little surprised with the strength of sales enquiry for the Drury South Crossing sites, and are further ahead with sales than we expected to be at this stage of the development. This is a reflection of business confidence in Auckland, as well as on the shortage of developed commercial and industrial land, especially the larger sites which involve a significant contribution by the purchaser.”

Stevenson is rationalising its other land holdings in the area to focus on the massive 361 hectare Drury South Crossing business park and  recently sold its 45 hectare Special Housing Area (one of three in the immediate area) to Classic Developments, part of the Classic Group of companies that also includes national group home builder Classic Builders. Up to 800 homes will be built, starting in 2019 with a focus on affordability.

Stephen Hughes says buyers of sites in Drury South Crossing  are responding to a general shortage of industrial land in Auckland and value the unique location and connectivity in Auckland’s fast growing south. Buyers will have direct access to and from metropolitan Auckland market and its port to the north, but also to the Port  of Tauranga and the various  inland ports and distribution centres in South Auckland and Hamilton.

“That’s how Drury South Crossing got its name – the massive growth plans for the region are well known and the connectivity from Drury South to various key destinations is summarised in the word “crossing”.

“Demand for sites is strong, we are currently in negotiation on several large blocks of up to 20 hectares, and the development could be more than half sold by late 2019. Potential investors see the opportunity to purchase sites outright, rather than lease them, and the availability of large blocks of land, as reinforcing their chosen business strategy.”

He says buyer enquiry has been for sites as small as half a hectare up to 30 hectares, and while one of the first purchasers is a Hamilton company wanting to shift north, most enquiry has come from Auckland businesses. Sites are being made available progressively as complementary public works are completed.

Construction of the first commercial buildings, warehouses and factories is expected to commence in a little over a year.

Drury South Crossing is surrounded by supporting infrastructure. It is immediately to the east of the Southern Motorway and Great South Road, between the Drury and Ramarama turnoffs, with services close by.

An added attraction for purchasers at Drury South Crossing is the three new housing estates adjoining the business park, with planning at various stages for town centres, retail and community facilities, a school, a railway station and a hotel. A large proportion of staff employed in the new businesses is expected to live locally, leading to short commutes. Site works to enable housing development is underway.

Drury South Crossing is expected to create over 5,000 new jobs directly and a further 10,000 indirectly in the Auckland region, as well as directly contributing nearly $800 million a year to gdp locally and a further $2.3 billion annually to regional gdp. Over the construction phase there will be an additional, one-off contribution to gdp of about $700 million.

Stevenson Group is  a significant private company which has been  active for more than a century in mining, quarrying, and other industries, including agriculture, throughout New Zealand.

The company has   worked with Auckland Council, particularly Watercare Services and  Auckland Transport, utilising the 361 hectares of land between its Drury quarry and the Southern Motorway to the west to protect the quarry’s operational capabilities in the future.

This has involved extensive local consultation and agreeing with Council on a timetable and funding plan to create a new roading network, linkages with existing roads, water, stormwater and sewerage services. All necessary environmental consents have also been obtained.

Drury South Crossing have worked with local iwi and particularly Ngati Tamaoho to ensure that the neglected Hingaia and Maketu streams, which flow through the overall site, are being remediated, and extensive native planting undertaken. This will become a feature of the overall development and a new wetland area will treat and improve water quality entering the Hingaia stream.

Some 90 hectares of the original Stevenson site will be used for these modifications and for new community facilities including recreation areas, parks, walking and cycling tracks.

Drury South Crossing is a project on which Stevenson Group has been working very closely with Auckland Council because of its sheer size, its pivotal role as a catalyst in the overall development of the area and the need for major supporting infrastructure to be funded and created on an agreed timetable.

“Our main focus is to get the planning and infrastructure ‘right-sized’ for growth. 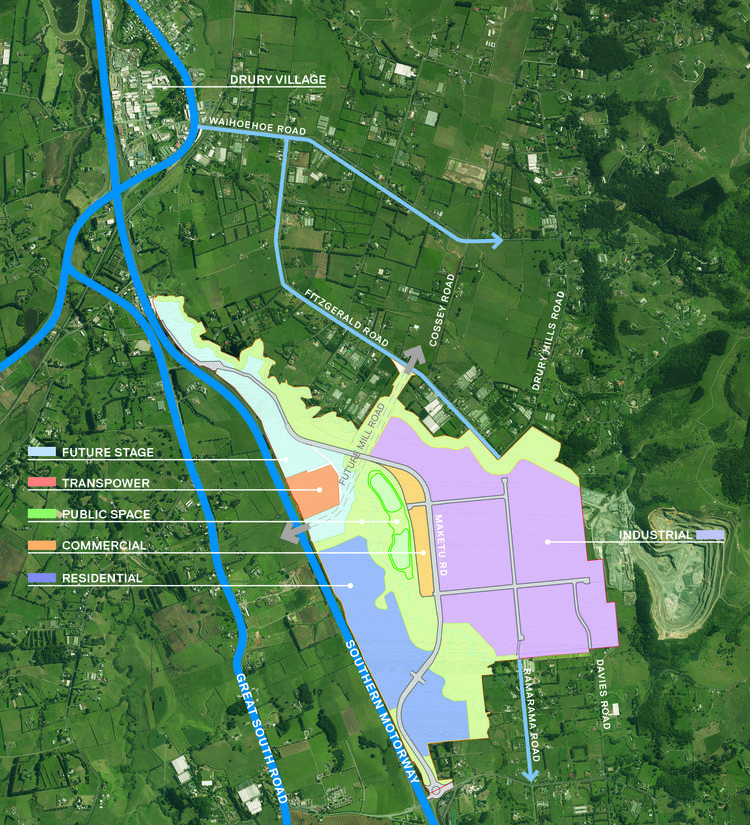